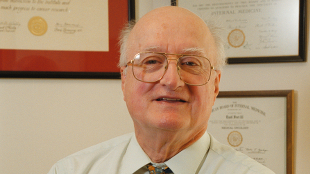 Emil Frei IIISTEVE GILBERTOncologist Emil Frei III, who was one of the first scientists to use combination chemotherapy to treat cancer, died last week (May 4). He was 89.

When Frei began his career as a clinician and cancer researchers in the 1950s, chemotherapy drugs—many of which were derived from mustard gas—were seen as a last resort, reported The New York Times.

But together with his National Cancer Institute (NCI) colleague Emil Freireich and others, Frei began to explore the possibility of combining these cell-killing drugs to treat pediatric leukemia. This enabled the use of each drug in smaller quantities, they found, mitigating the toxic effects without reducing their combined potency on cancer cells.

At that time, childhood leukemia was almost always fatal. But a decade later, the approach codeveloped by Frei had boosted the 5-year survival rate to around 40 percent, reported the NYT. Today,...

During his distinguished career, Frei held leadership positions at the NCI in Maryland, the MD Anderson Cancer Center in Houston, and the Dana-Farber Cancer Institute in Boston.

He was also a gifted physician, as Columbia University cancer researcher Siddhartha Mukherjee describes in his 2010 Pulitzer Prize-winning  book, The Emperor of All Maladies: A Biography of Cancer.  “He was charming, soft-spoken and careful,” wrote Mukherjee. “To watch him manage critically ill children and their testy, nervous parents was to watch a champion swimmer glide through water—so adept in the art that he made artistry vanish.”