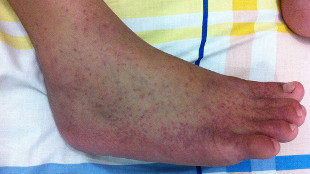 A rash on the foot of a Chikungunya patient.WIKIMEDIA, NSAA

Four members of the same family in Montpellier, France, have contracted Chikungunya, a mosquito-borne virus that is rarely fatal, but causes fever, headaches, and joint pain. This is the first report of locally transmitted Chikungunya in France since 2010; the disease is most prevalent in Africa, South Asia, and Southeast Asia.

In a press release issued yesterday (October 23), the World Health Organization (WHO) said that the infections occurred in the vicinity of a recent case imported from Cameroon. The four people diagnosed in Montpellier had not travelled to tropical regions for 15 days before the onset of symptoms—signs of the disease typically develop four to seven days after a mosquito bite.

There is no cure for Chikungunya, but treatments may alleviate symptoms. Local public health officials are implementing preventive measures, including spraying insecticides to control mosquito vectors.

First documented in Mozambique and Tanzania in the 1950s, the virus takes its name from a local Makonde word meaning “that which bends up”—a description of patients’ body contortions that result from severe joint pain. Since that time, Africa and southern Asia have seen occasional outbreaks. Local transmission of Chikungunya in the Western Hemisphere was identified in late 2013 in the Caribbean, where thousands of cases have been reported this year. This July, a Florida man contracted the virus on U.S. soil.