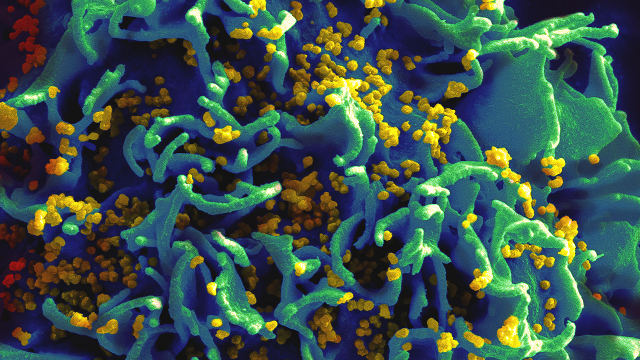 Scanning electron micrograph of HIV particles infecting a human T cellWIKIMEDIA, NATIONAL INSTITUTES OF HEALTHA South African girl has been living with HIV for more than eight, drug-free years after being diagnosed as a one-month-old baby and treated aggressively for the infection, report researchers at an international AIDS conference in Paris. The patient, now nine years old, received 40 weeks of antiretroviral therapy (ART) as a baby before doctors stopped all treatment to see if her immune system would fend off the infection on its own.

“Further study is needed to learn how to induce long-term HIV remission in infected babies,” Anthony Fauci, director of the National Institute of Allergy and Infectious Diseases (NIAID)—which funded the 2007 clinical trial in which the girl participated—says in a statement. “However, this new case strengthens our hope that by treating HIV-infected children for a brief period beginning in infancy, we...

Although researchers did find HIV in some of the girl’s immune cells, the virus did not appear to be capable of replicating, and the scientists failed to find any evidence of an active HIV infection. “To our knowledge, this is the first reported case of sustained control of HIV in a child enrolled in a randomized trial of ART interruption following treatment early in infancy,” Avy Violari, a scientist at the Perinatal HIV Research Unit of the University of the Witwatersrand in Johannesburg, said when presenting the case to the International AIDS Society conference today (July 24).

Two other children born with HIV—one in France and one in Mississippi,—showed similar promise in fighting off full-blown infections after lengthier periods of treatment early in life. The French patient, now 20 years old, shows no sign of infection after halting treatment at age six. The American child was in HIV remission for 27 months after receiving ART for about a year and a half as an infant. Her infection returned, however, when she was four years old.

The South African child adds to the evidence that early and aggressive ART may have a lasting effect on a patient’s ability to fight off HIV infection without continued treatment. “Technically, this baby is not totally cured of HIV, but it is certainly what is referred to as remission, in that there’s no virus circulating in the blood, and there is a normal immune system according to the range for children of their age,” Sarah Fidler, a researcher at Imperial College London speaking on behalf of the British HIV Association, tells Newsweek.