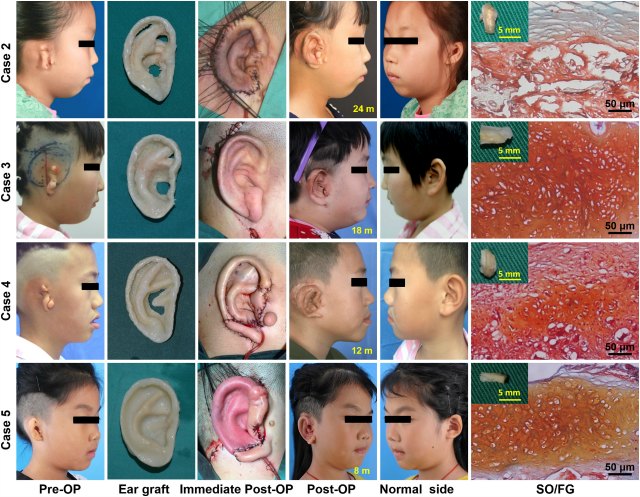 G. SHOU ET AL., EBIOMEDICINE, DOI:10.1016/J.EBIOME.2018.01.011, 2018Five children have had ear reconstruction using lab-grown cartilage that was seeded from their own cells and grown on 3-D-printed molds, researchers reported in EBioMedicine earlier this month (January 12).

“It’s a very exciting approach,” Tessa Hadlock at the Massachusetts Eye and Ear Infirmary in Boston tells New Scientist. “They’ve shown that it is possible to get close to restoring the ear structure.”

The kids were between the ages of 6 and 10 years old and all had microtia, a malformation of the external ear. The researchers took a sample of cartilage from each child, harvested the cartilage-forming cells (called chondrocytes), expanded them, and then grew them on a mold that was build from a CT scan of the patient’s normal ear. The tissue was then implanted into a skin flap to reconstruct the ear, a process that all told took several...

The first child has been followed for two and a half years, and the authors reported in their study that they are happy with the results, having “achieved satisfactory aesthetical outcome with mature cartilage formation.”

Previously, scientists had been able to transplant human ears into mice. Bonassar tells CNN that the challenges to expanding the use of the technique in humans include regulatory oversight and scaling up the personalized process.