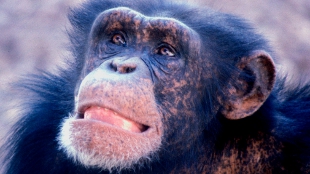 WIKIMEDIA, FRANS DE WAAL, EMORY UNIVERSITYFor the first time ever, scientists have caught wild chimpanzees transmitting knowledge to one another, bolstering the long-held claim that the primates may have “cultures” that approximate the ways in which human cultures spread throughout populations. The chimps, which make their homes in the Budongo Forest of Uganda, were captured on film using clumps of moss as tools to soak up and drink water. As more experienced apes engaged in “moss-sponging,” neophytes looked on and later imitated the behavior to quench their own thirsts. The learned behavior then spread throughout the community. “The chimpanzees just decided to display this novel behavior right in front of us,” Thibaud Gruber, a primatologist from the University of Neuchâtel in Switzerland who was part of the team that analyzed the footage, told The Verge, “and we only needed our camcorders to capture the scenes.”

Individual KZ (right of the screen) picks a leaf-sponge from the ground while his mother KW is extracting water from the waterhole. He then chews the used LS before leaf-sponging himself at the waterhole (video by Catherine Hobaiter).

Researchers had previously suspected that wild chimps engaged in this sort of cultural transmission, and some had observed the phenomenon in captive chimps, but Hobaiter’s footage establishes the presence of social learning in at least one population of wild chimpanzees. “We know from captivity that they are more than capable,” Susanne Schultz, a biologist at the University of Manchester in the U.K. who was not involved with the study, told BBC News. “But there are so few studies that can demonstrate its utility in the wild, and for this reason this paper is a big step forward.”

And because chimps are the closest living relative of human beings and likely shared a common ancestor at some relatively recent point in the evolutionary past, the results of the social network analysis suggest cultural roots that reach back earlier than the evolution of Homo sapiens. “With respect to humans, our findings strongly support the idea that the last common ancestors of chimps and humans could learn cultural behaviors from each other, in a similar way,” Gruber told BBC News.