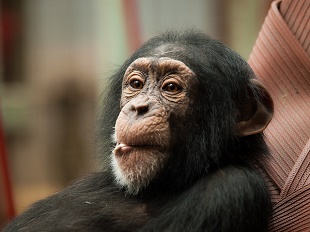 FLICKR, WILLIAM WARBYLike humans, chimpanzees possess a capacity to unconsciously dilate their pupils to match those of a conspecific, according to research published last week (August 20) in PLOS ONE. The results suggest this involuntary action likely evolved to help humans and chimps communicate sympathy and strengthen social bonds within groups.

In face-to-face interactions, people often involuntarily imitate each other’s facial expressions, eye blinks, or pupil size to convey empathy. These physical cues help communicate emotions to both individuals in the interaction, facilitating trust and cooperation within groups. But precisely when and how these signals evolved isn’t clear.

So Mariska Kret of the University of Amsterdam in the Netherlands and her colleagues searched for signs of pupil mimicry in chimps. Eight chimp and eighteen human participants were shown images of both human and chimp eyes with either dilated or constricted pupils. The researchers found that both humans and...

Previous work has suggested that these eye signals between individuals evolved with the appearance of the whites of eyes, which offer more contrast and make such cues easier to spot. “Traditionally, it's been thought that the evolution of white sclera was driven by its enhanced ability to indicate gaze direction, and hence share attention,” Neil Harrison of the University of Sussex in the UK told New Scientist. Harrison said the discovery of pupil mimicry in chimps is significant.

“The current findings show that pupil mimicry is not uniquely human but is possible in a species that has no clear visible eye-white and has less communicative eyes than humans,” the authors wrote in their paper.