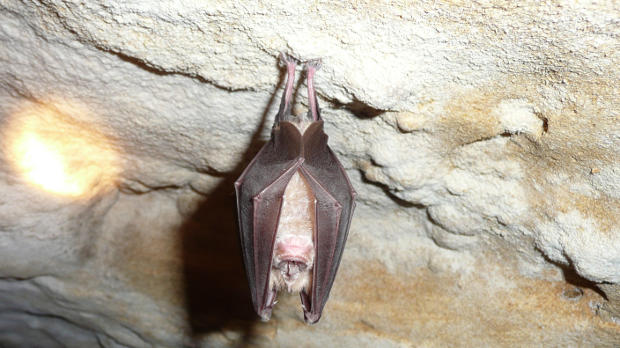 A greater horseshoe bat (Rhinolophus ferrumequinum), like those studied by researchers working in China.WIKIMEDIA, MARIE JULLIONWhite-nose syndrome (WNS) is tough on bats. But in North America, where the Pseudogymnoascus destructans fungus that causes the disease has killed an estimated 6 million bats, the flying mammals may be less-equipped to deal with the pathogen than their counterparts elsewhere. Researchers had previously found that bats in Europe, where—along with Asia—the fungus is thought to have originated before humans transported it to North America in 2006, are more resistant to infection. Now scientists working in China have reported that bats there may be strongly resistant to WNS. They reported their findings in the Proceedings of the Royal Society B yesterday (March 9).

“Uniformly, across all the species we sampled in China, we found much lower levels of infection—both the fraction of bats infected and the amount of fungus on...

Hoyt and his colleagues sampled bats in Northeastern China—including greater tube-nosed bats (Murina leucogaster) and greater horseshoe bats (Rhinolophus ferrumequinum)—and in the U.S. Midwest, two geographic regions where latitude and wintertime environmental conditions are similar. When the researchers compared the samples, they found that far fewer of the Asian bats were infected with P. destructans, and those that were appeared less overrun with the fungus.

The team tested a variety of explanations for the Chinese bats’ apparent resistance to WNS, finding higher host resistance to pathogen growth—as opposed to host tolerance, lower transmission rates due to smaller populations, or lower pathogen growth rate due to environmental conditions—the most likely. If the underlying reasons for host resistance are genetic, it could signal a glimmer of hope for North American populations, the researchers noted: if disease spread slows, natural selection could have a chance to catch up.

But according to study coauthor Kate Langwing, now a postdoc at Harvard University, there could be other factors driving host resistance to WNS in China and beyond. “It doesn’t have to be the same strategy for every species—it could be differences in the skin microbiome in one and hibernation behavior in another—but we just don't have those details yet,” she said in the statement.