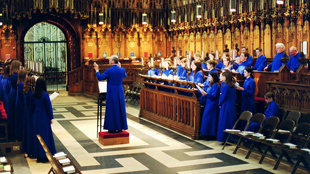 When members of a choir get together, they do more than harmonize their voices. Singing demands certain breathing patterns, and as breathing becomes coordinated, heart rates follow, according to research published Tuesday (July 9) in Frontiers in Psychology.

It’s been known since the mid-1800s that respiration rate and variability in heart rate are linked. In general, pulse increases during inhalation and decreases during exhalation. “When you exhale you activate the vagus nerve, we think, that goes from the brain stem to the heart,” lead author Bjorn Vickhoff, a musicologist at the University of Gothenburg in Sweden, told BBC News. “And when that is activated, the heart beats slower.”

The entrainment of heart rate to breathing—called the respiratory sinus arrhythmia—underlies the proposed health benefits of activities such as yoga and prayer recitation. Rosary reading has been found to induce a rhythmic pattern of breathing once...

Vickhoff’s team monitored the heart rates of 15 teenage choir members singing together and demonstrated that a similar entrainment could be achieved through singing. They further showed that the singers’ heart rates became synchronized.

Songs with more structure, such as slow chants requiring steady breathing every 10 seconds in between phrases, were found to induce a stronger synchrony in the singers’ heartbeats than free singing or humming.