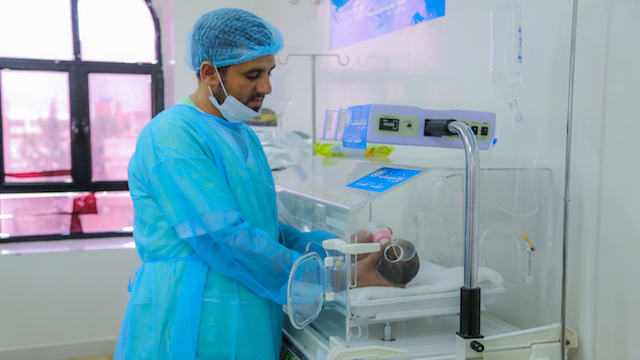 A healthcare worker treating an infant in YemenUNICEFYemen, a country ravaged by two years of intense conflict, is experiencing a rapidly spreading cholera epidemic. According to the World Health Organization (WHO) and UNICEF, as of Wednesday (June 7) the number of suspected cases of the acute, infectious diarrheal illness has reached 101,820, with 791 deaths. Forty six percent of the reported cases are in children under age 15, and 33 percent of the fatalities have been in people over the age of 60.

“I personally received 180 cases in one day,” Mohammed Zaid, a doctor who works at a hospital in Sana’a, Yemen, tells the Guardian. “People are left lying in the corridors, and in some cases we are having to put six children in one bed.”

Cholera typically spreads through contaminated food and water. Without treatment, people with severe cases can die from dehydration within hours....

“Two years of war have plunged the country into one of the world’s worst humanitarian crises and put Yemen at risk of famine,” Sajjad Mohammed Sajid, Oxfam's Yemen Country Director, says in a statement. “Now it is at the mercy of a deadly and rapidly spreading cholera epidemic. Cholera is simple to treat and prevent, but while the fighting continues the task is made doubly difficult.”

According to the WHO, 14.5 million Yemenis do not have regular access to clean water and sanitation, and medical supplies are entering the country at a third of the rate they were before the civil war started in March 2015.

“We are responding to a major crisis without having the basics,” Geert Cappelaere, UNICEF’s regional director for the Middle East and North Africa, tells the New York Times. “The reality is incredibly dire.”