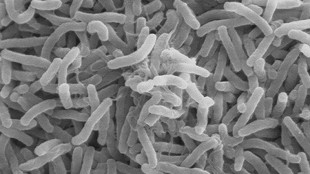 DARTMOUTH COLLEGE, RIPPEL ELECTRON MICROSCOPE FACILITYCholera has been present in the Ganges River Delta since ancient times, and it appears to have left its evolutionary mark on the region’s inhabitants. When compared to people from around the world, families from Bangladesh showed evidence of evolution in gene regions that regulate chloride ion secretion, which is overstimulated by cholera infection, as well as in genes involved in the innate immune system, according to a paper published last week (July 3) in Science Translational Medicine.

The researchers studied the genes of 42 Bangladeshi family groups, each including a mother, a father, and a child, and used statistical methods to zero in on regions of the genome that had undergone positive selection in comparison to the genes of people from other parts of the world. The results showed that certain regions of the genome were under strong selection in Bangladeshis compared...

Genes that encode potassium channels that are involved in regulating chloride ion secretion in the gut were in regions of the genome under positive selection in Bangladeshis. The cholera bacterium causes severe diarrhea by inducing release of chloride ions in the gut, and so better regulating chloride secretion in response to the bacterium could help fight dehydration caused by cholera infection. Genes that encode proteins that regulate the NF-κB inflammatory pathway, which cholera bacteria activate, were also under positive selection.

The researchers also genotyped Bangladeshis who had been infected with cholera and compared their genes to people in their households who had not been infected. They found that cholera susceptibility was associated with gene variants in many of the same regions that had been under positive selection in the Bangladeshi population in general.

“I think it’s a great example of the impact infectious diseases have had on human evolution,” microbiologist and pathologist William Petri of the University of Virginia School of Medicine, who was not involved in the study, told ScienceNOW.