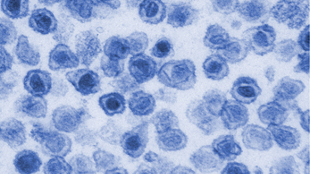 Microscopic image of XMRV (Xenotropic murine leukemia virus-related virus)WIKIMEDIA, CDCIn 2009, Judy Mikovits of the Whittemore Peterson Institute in Reno, Nevada, published a Science paper claiming that the majority of chronic fatigue patients she and her team examined (68 out of 101) carried xenotropic murine leukemia virus–related virus (XMRV). The researchers proposed XMRV as the cause of chronic fatigue syndrome (CFS). Two years later, Science retracted the paper without the full consent of Mikovits and her coauthors when follow-up studies failed to replicate the results indicated that laboratory contamination may have led to the findings. A veritable circus ensued with Mikovits being fired, sued, and arrested on charges were later dropped, all while she maintained her innocence and stuck by her claim that XMRV caused CFS. Now Mikovits has coauthored a book, Plague: One Scientist’s Intrepid Search for the Truth about Retroviruses, Chronic Fatigue Syndrome,...

Mikovits’s coauthor, Kent Heckenlively, drew the link from the XMRV-CFS story to the autism-vaccine conspiracy theory in a piece published Monday (March 10) on Age of Autism, a blog predicated on the premise that autism is a manmade affliction. “In many ways I felt her story, especially the campaign of persecution against her,” he wrote, “mirrored that of many other honest scientists who have looked for answers to the questions raised by these diseases.”

Heckenlively was referring to discredited autism researcher Andrew Wakefield, whose published claims that measles, mumps, rubella vaccinations caused autism were retracted from the literature and thoroughly debunked. Mikovits’s own follow-up research on the link between XMRV and CFS refuted her earlier findings. “The bottom line is we found no evidence of infection with XMRV,” said Mikovits’s co-author Ian Lipkin of Columbia University in a statement on the 2012 study. “These results refute any correlation between these agents and disease."