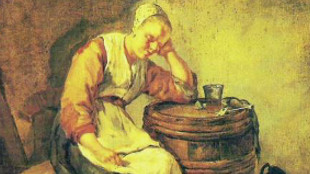 WIKIMEDIA, JACOB TOORNVLIET's 'THE SLEEPING WOMAN' Humans’ 24-hour circadian clock plays a leading role in glucose tolerance, according to a study published Moday (April 13) in PNAS. Researchers in Boston have found that, because of body’s circadian rhythm, human glucose tolerance is reduced during the evening hours, even when “day” and “night” times are experimentally reversed.

“In a prior [human] study, we found that when behavior cycles of feeding and sleeping are not in normal alignment with the internal body clock, that this negatively affects the regulation of blood sugar and especially glucose tolerance,” said neuroscientist Frank Scheer from the Division of Sleep and Circadian Disorders at the Brigham and Women’s Hospital in Boston. People who work night shifts are more prone to type 2 diabetes and obesity, he noted.

In an attempt to understand the independent effects of eating and sleeping behaviors versus the circadian clock on...

“We showed that glucose levels after identical meals were 17 percent higher [indicating lower glucose tolerance] in the evening than in the morning, independent of when a participant had slept or had their meals,” study coauthor Christopher Morris, an instructor of medicine at the Division of Sleep and Circadian Disorders at Harvard Medical School, wrote in an e-mail to The Scientist.

The results suggest that, rather than behavioral cycles, the body clock largely dictates the body’s daily glucose tolerance.

“This phenomenon of mistiming of the behavioral cycle relative to the . . . body clock, [called] ‘circadian misalignment,’ may have important implications for shift workers,” Morris added.