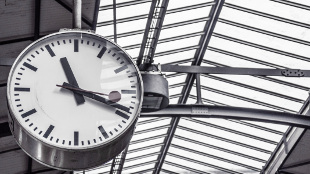 PEXELS, GRATISOGRAPHYLike tissues throughout the body, tumors may also keep time, and a few studies have suggested that responses to cancer therapies may be stronger at particular times during the day. Related to this idea of “chronotherapy,” scientists this week (April 20) presented unpublished data at the American Association for Cancer Research (AACR) meeting in Philadelphia showing that the effect of curcumin on rat glioblastoma cells cycles according to a circadian rhythm.

Curcumin, a component of the spice turmeric, is known to have anti-cancer properties, and researchers are testing it out as a potential therapeutic agent. Given that curcumin can activate a gene important to regulating the circadian clock, Ashapurna Sarma, a graduate student in Michael Geusz’s lab at Bowling Green State University, along with colleagues at the University of Findlay’s College of Pharmacy in Ohio, wanted to see whether the anti-tumor effects of curcumin display any circadian rhythms....

The team exposed rat glioblastoma cells to curcumin and filmed them for five days via time-lapse microscopy. The researchers then went back through the images and at five-minute intervals, manually counted the cancer cells. They found that “there’s a lot more apoptosis” in the treated cells compared to controls, Sarma told The Scientist. And for one particular concentration of curcumin, treated cells peaked in die-offs just about every 24 hours.

“Curcumin is most effective at inducing apoptosis of glioma cells at a specific phase of the circadian cycle,” the authors wrote in their AACR poster. Sarma said the findings could have implications as researchers working to develop curcumin as a therapy for cancer patients; perhaps tweaking the timing of treatment could optimize its efficacy.