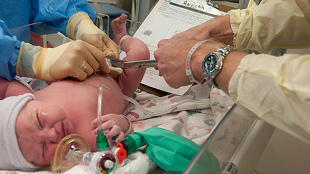 FLICKR, DAVE HERHOLZWhen a baby comes out of its mother, it is still attached to her via the umbilical cord and still hooked into her blood supply. Ordinarily, the umbilical cord is clamped and then cut within the first minute after birth. But a new paper published in The Cochrane Database of Systematic Reviews last week (July 11) indicates that babies may fare better if the cord is cut a few minutes later, allowing more blood to flow from mother to child.

“A more liberal approach to delaying clamping of the umbilical cord in healthy term infants appears to be warranted, particularly in light of growing evidence that delayed cord clamping increases early hemoglobin concentrations and iron stores in infants,” the authors wrote in their review.

The researchers looked at data from 15 trials that analyzed how 3,911 mother-infant pairs fared after delivery. The babies’ cords were generally clamped...

According to The New York Times, opinion on the timing of cord clamping is split. The World Health Organization recommends clamping the cord between 1 and 3 minutes after birth, erring on the side of clamping earlier if therapy for jaundice is unavailable.

The American College of Obstetricians and Gynecologists in December did not find evidence definitively supporting later cord clamping. They noted that most babies in the United States have sufficient iron.

The review is only relevant to timing of cord cutting following vaginal birth, Cynthia Gyamfi-Bannerman, a Columbia University obstetrician and gynecologist, told NYT. “We don’t have enough information on the effects of delayed cord clamping for someone undergoing a Caesarean delivery in terms of postpartum hemorrhage,” she said.