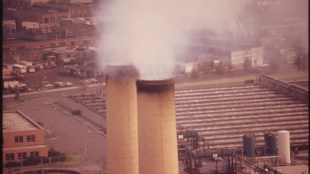 WIKIMEDIA, U.S. NATIONAL ARCHIVES AND RECORDS ADMINISTRATIONWei-Hock “Willie” Soon, a solar physicist at the Harvard-Smithsonian Center for Astrophysics (CfA), received significant funding from energy companies while publishing studies that suggested solar activity, rather than human-generated greenhouse gasses, was causing dramatic shifts in global climate. Soon, whose work is frequently cited by conservative politicians to support their skepticism of the human role in climate change, accepted more than $1.2 million from fossil-fuel companies over the past decade, according to documents obtained by environmental group Greenpeace under the Freedom of Information Act. During that same period, Soon failed to disclose any the financial conflicts of interests to publishers of his scientific studies, violating journals’ ethical guidelines in several cases, The New York Times reported.

Though the vast majority of climate scientists agree that the Earth’s climate is changing as a result of human activities that increase the amounts of greenhouse gasses...

The CfA announced that it would launch a formal inquiry into Soon’s failure to properly report the energy-industry funding, some of which was also funneled to the CfA itself, according to the newly divulged documents. The investigation will take place even though the institute doesn’t have an official policy mandating that its researchers report disclose funding sources when they publish. “We want to get the facts straight,” CfA Director Charles Alcock told Nature. “If there is evidence of failure to disclose, yes, we have a problem.”

According to the documents obtained by Greenpeace, Soon submitted annual reports to the Southern Company, a Birmingham-Alabama-based energy firm, in which he referred to nine journal articles as “deliverables,” after the company provided at least $400,000 to the researcher. Soon did not mention support from Southern in any of the articles.

Update (March 2): In a statement, Soon today said he has “never been motivated by financial gain to write any scientific paper,” and denies having “hidden grants or any other alleged conflict of interest.”