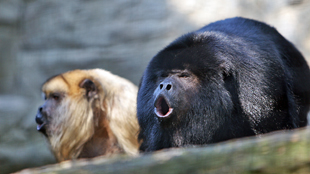 Climate change may occur too quickly for many animals, according to a new study published in the Proceedings of the National Academy of Sciences Monday (May 14). Researchers at the University of Washington in Seattle estimate that climate change will outpace about 9 percent of mammal species in the Western Hemisphere, bringing about devastating weather changes before the animals can move into new, hospitable territories.

Many species have already begun expanding their ranges to escape the warming climates and changes in precipitation, and may successfully escape significant population crashes. Animals with already dynamic ranges, for example, like caribou and wolves, are expected to be able to outrun climate change. But others, like primates and some rodents, may not respond in time, co-author Joshua Lawler, associate professor of environmental and forest sciences, said in a press release.

The researchers combined projections of the pace of...

"Conservation planners could help some species keep pace with climate change by focusing on connectivity—on linking together areas that could serve as pathways to new territories, particularly where animals will encounter human-land development," lead author Carrie Schloss, a University of Washington research analyst in environmental and forest sciences, said in a press release. Furthermore, "reducing non-climate-related stressors could help make populations more resilient,” she added. “But ultimately, reducing emissions, and therefore reducing the pace of climate change, may be the only certain method to make sure species are able to keep pace with climate change."