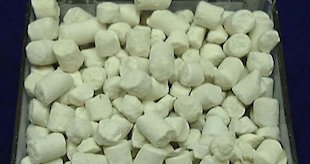 Lithium pelletsWIKIMEDIALithium has long been used to treat bipolar disorder, but its mechanism of action wasn’t well understood. Researchers from MIT have identified a key protein in the brains of roundworms called BPNT-1 that makes the animals less active, they reported today (July 7) in Current Biology. When the researchers inactivated the BPNT-1 gene, the worms ceased to engage in avoidance of harmful bacteria or reactivate from a hibernation state. They saw the same effect when they treated the worms with lithium.

“How lithium acts on the brain has been this great mystery of psychopharmacology,” study coauthor Joshua Meisel of MIT said in a statement. “We think that it’s perfectly reasonable to add BPNT1 onto the list of hypotheses for how lithium is affecting the brain,” he said, but cautioned against extrapolating the findings to humans.

In a previous study, Meisel and colleagues found that chemosensory...

The present study suggests that lithium treatment inhibits ASJ neurons by blocking the activity of BPNT-1. This protein dephosphorylates a compound called PAP, an inhibitor of RNA breakdown. In humans, PAP is found in neurons that produce the stimulatory neurotransmitters dopamine, epinephrine, and norepinephrine.

Future studies are needed to investigate lithium’s mechanism of action in other animals, including humans, the researchers said in the statement.