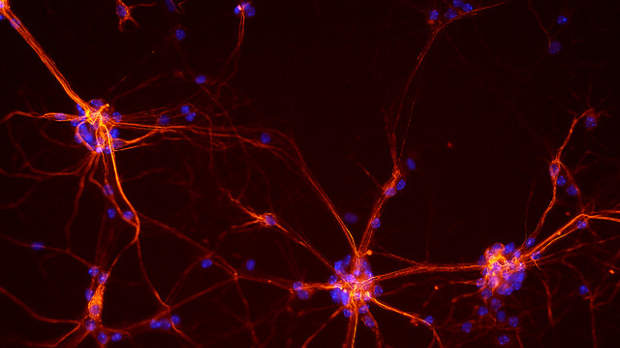 Neurons from a mouse spinal cordFLICKR, NICHD/S. JEONGResearchers have further detailed the mechanism by which high doses of cocaine kill neurons: they cannibalize themselves through the cellular process of autophagy. Examining mouse brains following cocaine administration, Johns Hopkins University neuroscientist Solomon Snyder and his colleagues found evidence that autophagy, in which cells package up various cellular components and debris into vacuoles that merge with enzyme-filled lysosomes for degradation, had spun out of control in neurons, just like previous work has shown for astrocytes and microglia.

“A cell is like a household that is constantly generating trash,” coauthor Prasun Guha, a postdoc in Snyder’s lab, said in a press release. “Autophagy is the housekeeper that takes out the trash—it’s usually a good thing. But cocaine makes the housekeeper throw away really important things, like mitochondria, which produce energy for the cell.” Guha and colleagues published their results this week...