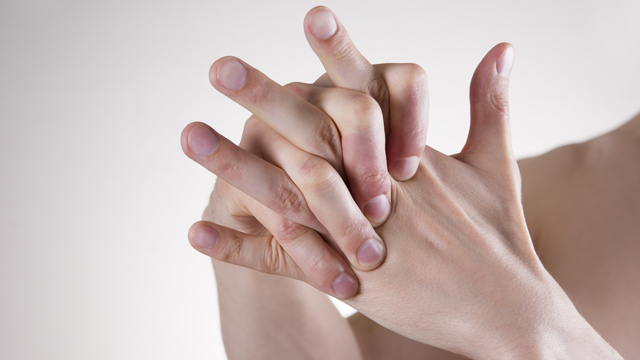 ISTOCK, STARASMathematics may now explain why we hear a “pop” when our knuckles crack. The sound comes from the partial collapse of little gas bubbles in joint fluid, researchers report today (March 29) in Scientific Reports.

“The cavity in between the two knuckles is filled with a fluid that is called the synovial fluid, and when you suddenly change the pressure in that fluid as a result of increasing the spacing between the knuckles, some of the gases in that fluid can nucleate into a bubble,” study coauthor Abdul Barakat of École Polytechnique in France tells The Guardian.

Previous research had suggested that the collapse of the bubbles can generate the cracking noise, but others argued that pressure changes produce the sound, Barakat tells The Guardian. Images of knuckle cracking taken in an MRI scanner and published in 2015 suggested the sound was the result of...

But Barakat and his former student, Vineeth Chandran Suja, who is now at Stanford University, decided to develop a mathematical model of three components of knuckle cracking: pressure changes of the fluid as knuckles separate, development and collapse of a bubble, and the influence of pressure changes in the bubble on generating sound.

The duo’s model revealed that bubble formation did not produce sounds loud enough to match what one would expect to hear when a person cracked her knuckles. Instead, it matched the sounds of bubbles popping within the joints. That led the team to conclude that there are “pressure variations in the joint which causes the size of the bubbles to fluctuate extremely fast, and this leads to sound, which we associate with knuckle cracking,” Suja tells the BBC.

“Their main finding, that theoretical bubble collapse can create sound, is not surprising,” Greg Kawchuk of the University of Alberta and coauthor of the 2015 study tells The Guardian. “What makes this paper interesting is that it suggests that other phenomena may occur in between frames of the MRI video published in our prior study and that these phenomena may create sounds that are similar to those produced in knuckle-cracking.”

Barakat notes in Gizmodo that there are some limitations to the work, such as the assumptions about the bubbles being perfectly spherical and the joint being an “idealized, common shape,” among others. “Furthermore, a limitation of the study is that we do not model the formation of the cavitation bubble in the synovial fluid but only bubble collapse,” he says. “A possible future direction of this work is to extend the modeling to include the phase of bubble formation.”

The mathematical model will also have to be verified by experiments.