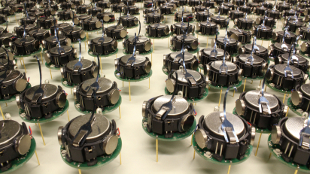 A close-up of the Kilobot swarmMICHAEL RUBENSTEIN, HARVARD UNIVERSITYA simple set of rules, basic infrared communication, and four “seed robots” that coordinate the group’s behavior is all that’s needed for a flock of 1,024 man-made machines to self-assemble into preprogrammed shapes, such as a star or the letter K. The so-called Kilobots—each roughly the size of a stack of five quarters, propped up on three thin legs—detect the presence of other bots within 10 centimeters of themselves by measuring the strength of their neighbors’ infrared signal. Within 12 hours of introducing the four seed robots to the swarm, the Kilobots have taken on the programmed configuration. The work was published last week (August 14) in Science.

“That is a beautiful accomplishment,” Hod Lipson, a roboticist at Cornell University who was not involved with the work, told Science. “Really getting a thousand robots to perform in sort...

In addition to leading to insights in collective animal behavior, the study’s authors, including Harvard computer scientist Michael Rubenstein, hope that such programmable devices could lead to shape-shifting materials that can take the form of different tools, for example. These future robots would act “like a three-dimensional printer, but instead of printing with plastic filament, you'd be printing with robots that can move themselves,” Rubenstein told Nature.