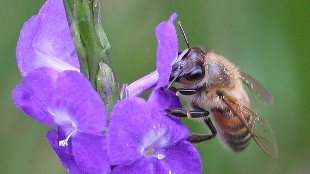 A new study from Harvard University researchers is stirring the controversy over the cause of honeybee deaths across the United States and Europe by pointing once again to pesticides. The study, publishing in the June Bulletin of Insectology found that small levels of a widely used class of pesticide called neonicotinoids fed to the bees over their lifespan, replicates some of the colony-collapse behaviors, such as males abandoning their hives in the winter. The study adds to the findings published late last month that bumble bees exposed to neonicotinoids produced fewer queens and exposed honey bees had trouble finding their way home, and gives insight on how lower doses can impact the insects.

Although the pesticides, which act on the nervous system of insects, may not directly kill the bees unless much higher doses are given, low doses appear to make the bees more susceptible...

Bayer, the chemical company that produces the newer version of the pesticide, says the chemical is safe. It was created in the 1990s as an alternative to pesticides that harmed human health, and has since been used throughout the world, reported Wired.  Bayer issued a response to the release saying that the study was “based on artificial and unrealistic study parameters that are wildly inconsistent with actual field conditions insecticide use.”

But with so many studies now linking neonicotinoids to aspects of colony collapse, scrutiny over its effects is growing: the US Environmental Protection Agency is performing its own analysis of the chemical, and more than 1.25 million people have signed petitions requesting a ban.