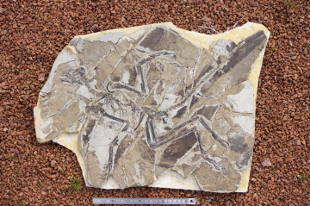 A. huxleyi fossilROYAL BELGIAN INSTITUTE OF NATURAL SCIENCES, THIERRY HUBINScientists have debated for years whether melanin, a dark pigment responsible for black and brown coloration in many organisms, could survive fossilization. Now, molecular analyses confirm that some imprints in fossilized dinosaur feathers are caused by the pigment, according to a study published last week (August 27) in Scientific Reports.

Tiny imprints in the feathers of fossilized dinosaurs have alternately been attributed to both melanosomes—pockets of melanin—and bacteria. Previous studies suggested that the imprints discovered in some fossils were melanosomes based on their structure and organization compared to those in feathers of modern-day birds. However, this research relied primarily on physical similarity rather than chemical confirmation.

To combat this ambiguity, an international team of paleontologists studied a fossil specimen of Anchiornis huxleyi from northeastern China—an extensively feathered avian more primitive than Archaeopteryx. The researchers scraped feather...

“This evidence of animal-specific melanin in fossil feathers is the final nail in the coffin that shows that these microbodies are indeed melanosomes and not microbes,” said study coauthor Ryan Carney, a graduate student at Brown University, in a press release.

The results lend support to multiple studies that have already used the size and orientation of fossil imprints, assumed to be melanosomes, to investigate feathered dinosaur coloration. Determining this aspect of dinosaur appearance may inform future research on the animals’ communication and behavior, the researchers noted.