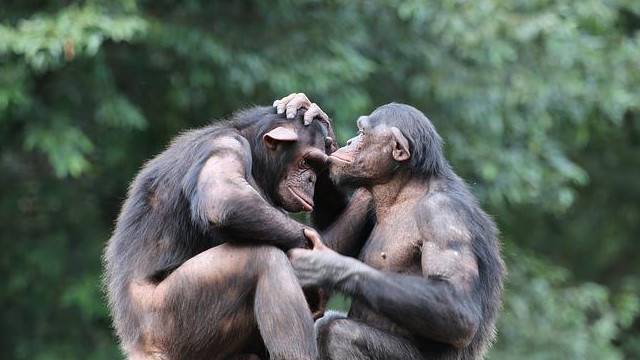 PIXABAY, JOELFOTOSNo chimp is an island. According to a November 2 study published in Nature Communications, chimpanzees exhibit fewer signs of stress when they are surrounded by “bond partners”—individuals with whom they share a strong social relationship—even when facing dangerous or otherwise stressful scenarios.

“We believe humans are very special because they can have these interesting relationships between each other that last over the years,” study coauthor Roman Wittig, a primatologist at the Max Planck Institute for Evolutionary Biology in Leipzig, Germany, told The Christian Science Monitor. “The feeling of good friendship, of strong bonds is something that chimpanzees can feel, too.”

While experts still debate whether non-human animals can display true empathy, seemingly altruistic behavior is well-documented in chimpanzees. One prior study even found that chimpanzees are capable of comforting their bond partners, and displaying as much apparent empathy as human children.

But this latest study adds physiological data to prior observations. Wittig and colleagues observed the stress levels of 17 chimpanzees in their natural habitats by measuring the amount of stress hormones known as glucocorticoids in the primates’ urine. The researchers found that whether chimpanzees were at rest, engaged in routine activities, or facing imminent (and potentially dangerous) territorial disputes, their stress levels remained in check as long as their bond partners were nearby. For the purpose of this study, Wittig and colleagues identified bond partners as chimps that shared food and groomed one another over the course of several months or years.

Martin Muller, an anthropologist at the University of New Mexico who was not involved in the study, told the Christian Science Monitor that further research is necessary to confirm these results. For now, Muller noted that the present study has shown that measuring glucocorticoid levels in chimpanzees “is a way to very clearly measure the impact that a social bond can have.”