C. elegansWIKIMEDIA, KBRADNAMScientists studying the nematode worm Caenorhabditis elegans—an important model organism in aging research—often use a chemotherapy drug called FUdR to sterilize the worms and prevent them from laying eggs. But this drug may also affect the worms’ lifespans, calling the results of many aging studies into question, according to a paper published yesterday (February 22) in Mechanisms of Ageing and Development.

“There were very different effects in published papers that had different doses of FUdR in them,” study coauthor Anne Hart of Brown University said in a statement. “We can explain a lot of the disagreement in the C. elegans aging field by realizing that FUdR can dramatically change the answer.”

Examining FUdR’s mechanism-of-action in C. elegans, the researchers found that in addition to mediating nematode reproduction, the drug triggers a stress response and activates pathways of DNA repair—two processes that are...

What’s more, when the researchers carried out their own aging experiments while taking into account the dose of FUdR, they found that the drug could dramatically alter the results. For example, one stressful environment that appeared to increase the C. elegans lifespan by 30 percent when FUdR was present in fact reduced lifespan when the drug was absent.

“We didn’t expect to have this happen,” Hart said in the statement. The results support a re-examination of published results on FUdR-treated C. elegans, she added. 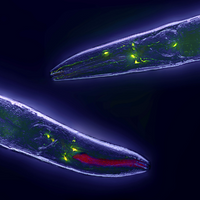 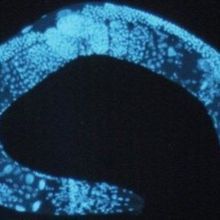