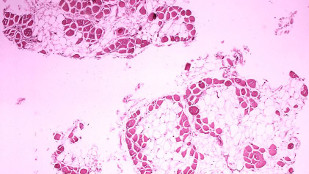 Histopathology of gastrocnemius muscle from patient who died of pseudohypertrophic muscular dystrophy, Duchenne typeWIKIMEDIA; CDC, DR. EDWIN P. EWING, JR. The US Food and Drug Administration (FDA) today (September 19) announced its first approval of a drug for Duchenne muscular dystrophy (DMD). Sarepta Therapeutics’s eteplirsen is “specifically indicated for patients who have a confirmed mutation of the dystrophin gene amenable to exon 51 skipping, which affects about 13 percent of the population with DMD,” according to the agency.

In April, an FDA advisory committee voted 7-to-3 against approval of eteplirsen. Some committee members indicated that they were not convinced of the drug’s efficacy based on the results of a 12-person clinical trial.

The agency OKed eteplirsen, which will be marketed as “Exondys 51,” through its accelerated approval pathway. While the drug will now be available to applicable DMD patients, Sarepta must still verify its efficacy. “Accelerated approval makes this...

“Woodcock overruled others in the FDA in giving this drug a green light, including Ellis Unger, the director of the Office of Drug Evaluation, who protested against Woodcock’s decision,” Endpoints reported. “And while the drug has its avowed supporters, a legion of critics has noted that Sarepta never provided the data needed to win an approval.”

According to STAT News, “the fate of the Sarepta drug has been closely watched as a litmus test for an intensifying struggle between the FDA and patient groups that want the agency to take a more expansive view toward approving medicines for unmet medical needs.”

Update (September 22): FDA Commissioner Robert Califf has called for the correction or retraction of a 2013 Annals of Neurology paper on eteplirsen. “The publication, now known to be misleading, should probably be retracted by its authors,” Califf said in a report sent to the agency on September 16.

According to Retraction Watch, the lead author of the study stands by the data and will not seek a retraction. Clifford Saper, editor in chief of the Annals of Neurology, told Retraction Watch: “It takes more than a call by a politician for retraction of a paper. It takes actual evidence.”