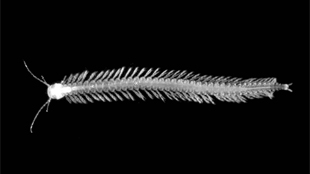 Live remipedePLOS ONE, J. VAN DER HAMMany species of scorpions, spiders, and centipedes produce venom, which they use to catch prey or defend themselves. Although they, too, are athropods, until now, no one had definitively found a species of venomous crustacean. But researchers from the Natural History Museum in London have shown evidence of such a critter, and showed in a Molecular Biology and Evolution paper published last week (October 16) that the aquatic, cave-dwelling crustacean (Speleonectes tulumensis) expresses known venom genes and produces a neurotoxin.

S. tulumensis is a member of a group called the remipedes, which were described for the first time in 1981. The crustaceous creatures look a bit like centipedes, but live underwater in caves, and are blind. The Natural History team discovered the crustacean’s unprecedented toxin-producing ability using transcriptomics. The researchers found that most of the venom genes that S....

“There might be a few more instances of venomous crustaceans, for which current evidence is anecdotal,” Jenner told Not Exactly Rocket Science, though venom use in crustaceans is still rare. Marshall McCue, an assistant professor at St. Mary’s University in San Antonio, Texas, offered one explanation for their rarity. “As adept filter feeders and scavengers, crustaceans may not have been subjected to the same pressures as other arthropods to develop a predatory weapon-like venom,” he told Nature.