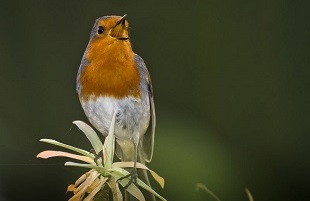 WIKIMEDIA, JUAN EMILIOElectromagnetic “noise” from human development may confuse the internal compasses of migratory birds, according to a study published this week (May 7) in Nature. A team led by Henrik Mouritsen of the University of Oldenburg in Germany stumbled across the finding after running into repeated problems with an experiment looking at orienting behaviors in European robins ran. The robins didn’t orient as expected and it was only when the researchers introduced a Faraday cage—a metal screen with a grounding wire—where the birds were housed that they were able to use their internal compasses again.

Scientists are slowly uncovering the workings of many animals’ ability to sense magnetic fields and navigate by them, or magentoreception. The nature of the electromagnetic radiation affecting Mourtisen’s robins was perplexing, however, because it was at a wavelength much lower than what scientists have predicted as having a biological effect—in the...

“It’s significant, because we found a very clear, repeatable effect of electromagnetic noise made by electrical equipment that prevents a bird, in this case a European robin, from using its magnetic compass,” Mouritsen told The Washington Post.

It’s unclear what is causing these waves and whether the effect is localized. When the birds were moved to a rural off-campus site, they regained their ability to orient even without the Faraday cage.

“Without knowing the origin of these magnetic fields, it’s hard to know what it means,” bird navigation researcher Roswitha Wiltschko at the Goethe University in Frankfurt, Germany, who was not involved in the work, told The Washington Post. “In order to assess this, we have to know more about where they come from. . . . It’s really mysterious.”

Correction (May 9): This article has been updated to correct a typo affecting the spelling of Henrik Mouritsen’s name. The Scientist regrets the error.