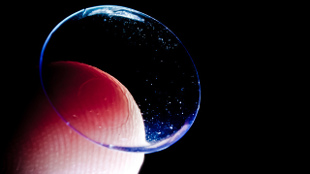 “Our research clearly shows that putting a foreign object, such as a contact lens, on the eye is not a neutral act,” Maria Gloria Dominguez-Bello, a microbiologist at New York University Langone Medical Center who worked on the study, said in a statement.

A survey of the microbiota living on and around the eyes of 20 volunteers showed differences in the microbial populations between those who wear contacts and those who don’t. The nine individuals who wore contact lenses displayed a higher level of diversity on the surface of the eye called...

In addition, wearing contacts correlated with a three-fold increase in Methylobacterium, Lactobacillus, Acinetobacter, and Pseudomonas species. Although eye infections are commonly thought to be caused by the bacteria Staphylococcus aureus, the study found that lens-wearers harbored more S. aureus than those who did not wear contacts.

“These findings should help scientists better understand the longstanding problem of why contact-lens wearers are more prone to eye infections than non-lens-wearers,” Dominguez-Bello added in the statement.

Going forward, the team would like to determine exactly how wearing contacts appears to change the ocular microbiome. “What we hope our future experiments will show is whether these changes in the eye microbiome of lens wearers are due to fingers touching the eye, or from the lens’s direct pressure affecting and altering the immune system in the eye and what bacteria are suppressed or are allowed to thrive,” said Dominguez-Bello.