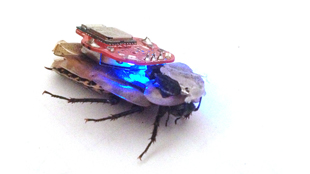 BACKYARD BRAINS, GREG GAGEWhen RoboRoach appeared as a Kickstarter project in June, the project to control a living cockroach’s movements using a smartphone, generated buzz and was successfully funded. Now the project is poised for a large-scale launch in November, but some dissidents have raised ethics concerns about the way it frames animal experimentation.

Greg Gage and Tim Marzullo, who are both trained neuroscientists and engineers, cofounded Backyard Brains, the company behind RoboRoach. According to the Kickstarter page, RoboRoach is a backpack that the roach wears that “communicates directly to the neurons via small electrical pulses.” By trimming the roach’s antenna to insert wires that could be attached to the Bluetooth backpack, aspiring neuroscientists can control the roach through a smartphone. Gage and Marzullo have billed the project as a way to spark an interest in neuroscience in students as young as 10 years old.

Backyard Brains responded to the criticisms of the project on the ethics section of the company’s website. “Our experiments are not philosophically perfect and without controversy; however, we believe the benefits outweigh the cost due to the inaccessibility of neuroscience in our current age,” they wrote. At Ted Global 2013 Gage added, “If we can get these tools into hands of kids, we can start the neuro-revolution.”