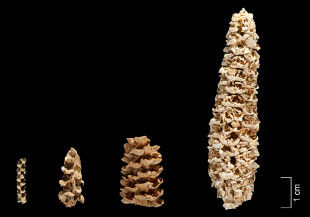 It’s well established that maize was domesticated from teosinte, a wild Mexican grass. But the route of corn’s spread into what is now the southwestern United States has been more murky: archaeological evidence has suggested kinship with maize from either Mexico’s central highlands or the Pacific coast.

Now, an international team led by researchers at the University of Copenhagen in Denmark has performed next-generation sequencing on 32 ancient corn samples covering a period of 6,000 years, and compared the ancient genes to those of modern maize. The results, reported today (January 8) in Nature Plants, suggest that the maize originally brought to the southwestern US came from the Mexican highlands around 4,000 years ago, while genotypes from coastal areas entered the mix some 2,000 years...

The findings show that farmers in the region were “crossing in varieties from elsewhere to keep improving [maize] through time,” study coauthor M. Thomas Gilbert of the University of Copenhagen told Science.

The earliest breeding efforts abolished a trait called shattering, which allows wild plants to spread their seeds, but would be a “very, very irritating feature” for a farmer wishing to save the kernels for later planting, Gilbert told Science. He and his colleagues also tracked the ancestries of traits such as drought tolerance, nutrition, and chemical properties relevant to making corn porridge and tortillas.

This study “indicates that our understanding of the spread of maize is a far more complex story than previously thought,” Robert Hard, an archaeologist at the University of Texas, San Antonio told Science.

“We have almost no data from the vast reaches of northern Mexico, the land between the origin of maize in Mexico and the American Southwest,” added Hard, who was not involved in the work. The archaeological record, he said, leaves “a huge gap in our understanding.”