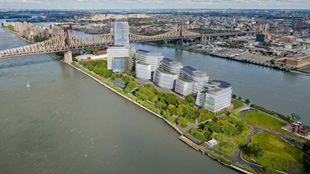 The proposed Cornell/Technion engineering and applied science campus for Roosevelt Island includes the largest net-zero energy building, which creates as much energy as it consumes, in the Eastern US. CORNELL UNIVERSITY

Cornell University, in a partnership with the Technion-Israel Institute of Technology in Haifa, has won the bid to build a state of the art science and technology research facility in New York City. With $100 million in funding from the city for infrastructure, Cornell and Technion plan to complete the first set of buildings for the graduate science campus, which will be located on Roosevelt Island, by 2017.

Once completed, the campus will house 280 faculty and 2,500 graduate students, as well as incubator and spin-out space for start-up companies, Nature reported. However, students could begin taking classes at off-site locations as soon as 2012.

“Of all the applications we received, Cornell and Technion’s was far and away the...

But the “competition is not over,” Bloomberg noted. The city is still reviewing the proposals from Carnegie Mellon, Columbia, and New York Universities for potential partnership opportunities, according to The Chronicle.