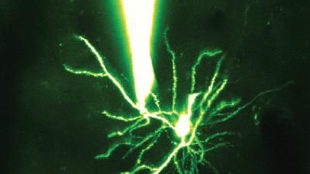 Pipette attached to a dendriteEUREKALERT, SPENCER SMITHDendrites—the branches that cover a neuron’s cell body—were once believed to function primarily as signal conductors, relaying information between nerve cells. Recent evidence has suggested that dendrites can also respond to stimuli, but it was unknown whether action potentials generated by dendrites were integrated into the signals that the neuron sent to receiving cells. Researchers have demonstrated that dendrites had electrical responses, or dendritic spikes, to visual stimuli in vivo and that these spikes enhanced the output of the neuron. Their work was published this week (October 27) in Nature.

“Imagine you’re reverse engineering a piece of alien technology, and what you thought was simple wiring turns out to be transistors that compute information,” study coauthor Spencer Smith of the University of North Carolina at Chapel Hill said in a statement. “That’s what this finding is like. The implications are...

The team also treated cells with a drug that blocked NMDA receptors—candidates for the integration of dendritic spikes with neuronal output—and showed that visual processing was disrupted, suggesting that dendritic activity is necessary for neurons to compute information.

“This work shows that dendrites, long thought to simply ‘funnel’ incoming signals towards the soma, instead play a key role in sorting and interpreting the enormous barrage of inputs received by the neuron,” said study coauthor Michael Häusser of University College London in a press release. “Dendrites thus act as miniature computing devices for detecting and amplifying specific types of input.”