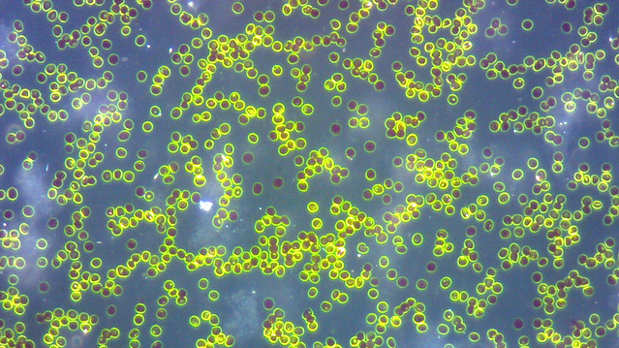 Human blood prepared on a slideFLICKR, SMALLER.PATHOLOGICAL.CAMicrobiologist Thomas Luckey, who in 1972 estimated that the number of microbial cells in and on the human body outnumbers those carrying the human genome by 10 to 1, was wrong: people are not more microbe than human, scientists now suggest. According to new research from scientists in Israel and Canada, a 5”7’, 20-year-old man weighing 70 kilograms (154 pounds) likely harbors some 30 trillion human cells (the vast majority of which are red blood cells) and 39 trillion bacteria.

“The numbers are similar enough that each defecation event may flip the ratio to favour human cells over bacteria,” the researchers wrote in a paper posted to the preprint server bioRxiv last week (January 6).

“One-to-one is pretty impressive,” Judah Rosner, a molecular biologist at the National Institute of Diabetes and Digestive and Kidney Diseases who questioned the 10-to-1 ratio in a...

Of course, the new estimate could be off by as much as 25 percent, the researchers noted, as it’s based on existing experimental data that could inform an assessment of human and microbial cell counts, such as estimates of bacteria in 1 gram of feces and data on the length of the human colon. Moreover, the team only considered bacteria; virus, fungi, and other microbes could push that ratio up, geneticist Julie Segre of the National Human Genome Research Institute told Science News.

But the exact number may not matter, said Peer Bork, a bioinformatician at the European Molecular Biology Laboratory in Heidelberg, Germany. “It is good that we all now have a better estimate to quote,” he told Nature. “But I don’t think it will actually have any biological significance.”

Update (January 29): The researchers published their results in Cell this week (January 28).