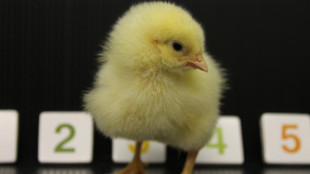 Chicks, like many people, have a mental number line which places lower numbers at left and higher ones to the right, according to a study published today (January 30) in Science. “This resembles humans’ behavior in responding to numbers,” study coauthor Rosa Rugani of the University of Padova, Italy, told Live Science.

The scientists were interested in testing whether the left-to-right number line typical in people is an artifact of human culture or a more innate characteristic. To examine how animals might correlate numbers of different sizes with physical space, the researchers trained three-day-old chicks to find food behind a panel with five red dots. When the trained chicks were presented with two panels, each with two dots, 71 percent of them approached the leftmost panel first in search of food. When the chicks instead encountered two panels that each had eight dots,...

“This finding completely overturns the idea—widely held in the past—that our mental number line is a human invention that depends on culture and on instruction,” Maria Dolores de Hevia of Paris Descartes University, who studies similar questions in children, told National Geographic’s Not Exactly Rocket Science.