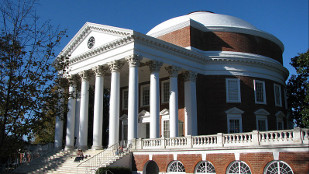 University of Virginia, Wikimedia, terren in VirginiaA federal court awarded Weihua Huang, a former University of Virginia geneticist, more than $800,000 last week after a jury found that the university wrongfully fired him for telling officials that his supervisor, Ming Li, had surreptitiously changed the budget for Huang’s grant—inappropriately increasing the amount of funding—provided by the National Institutes of Health.

“This decision is important to the entire grant community because, on these grants, levels of efforts are assigned and the principal investigator is responsible for the use of the money,” Adam Carter, Huang's attorney, told the Richmond-Times Dispatch. “That is the person who needs to be responsible and, in this case, that responsibility was taken over by the lab director.”

As a principle investigator, Huang applied for and received a NIH grant of $378,750 in 2008 to study the genetics of nicotine addiction. According to the suit, Huang...

Huang reported Li’s changes to Bankole Johnson, chair of the psychiatry and neurobehavioral sciences department—also a defendant in the suit—in October of 2009. In November, Huang received a letter informing him that the university would not renew his contract the following year. The letter stated that, “the intended decision [was] based upon the development of serious issues concerning your professional relationships with your supervisor, Dr. Li.” In his suit, Huang claims that Li then changed the locks on the lab doors to prevent him from entering.

In its decision last week, the court awarded Huang compensation in back pay as well as $500,000 for non-economic damages, such as damage to his scientific reputation.