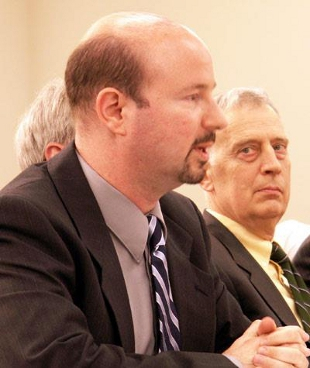 Michael Mann testifying before Congress, with National Academy of Science Chair Ralph Cicerone (July 27, 2006)NATIONAL ACADEMY OF SCIENCESA punching bag of climate change skeptics, Michael Mann has seen his fair share of intrusion into his e-mails. In 2009, he was one of a number of scientists whose hacked messages were part of the “Climategate” scandal. But a judge in Virginia ruled last week (April 17) that Mann’s e-mails from his time as a professor at the University of Virginia cannot be obtained through a Freedom of Information Act (FOIA) request.

“This is a victory for science, public university faculty, and academic freedom,” Mann, who is now a professor at Penn State, said in a statement. The latest decision upheld a lower court’s ruling.

The American Tradition Institute (ATI), now called the Energy & Environment Legal Institute, had sued to obtain Mann’s emails from the...

ATI’s attorney said in a statement that “the Court did not discuss ATI’s many specific examples of how the emails failed to offer any competitive advantage to the University. Instead, it accepted UVA’s unsubstantiated fears that release of the emails would significantly chill intellectual debate and on that basis allowed UVA to continue to operate under a veil of secrecy that the citizens may not penetrate.”

A number of news organizations, including the Associated Press, NPR, Politico, Reuters, and others supported ATI with an amicus brief filed in 2013. According to the brief, “by defining an exemption to the Virginia Freedom of Information Act (“VFOIA”) as broadly as the lower court has done, this Court would be, in effect, removing almost all public documents from the ambit of the records law.”

Michael Halpern, the program manager for the Center for Science and Democracy at the Union of Concerned Scientists, supported the latest court’s decision. He wrote on his blog that “demanding private email correspondence among scientists is the 21st Century equivalent to eavesdropping on conversations around the water cooler. All of us need safe space to develop ideas and open them up to scrutiny so that we can make them better.”