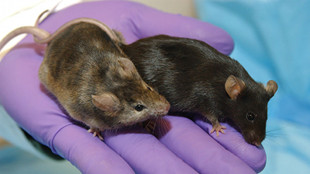 WIKIMEDIA, MAGGIE BARTLETT, NHGRICreating genetically modified mice for experiments can take months or even years, and making mice with multiple mutations can be especially time-consuming. But a new system for genetically engineering model organisms could reduce that time to under 4 weeks, according to a paper published last week (May 2) in Cell.

“This new method is a game changer,” Rudolf Jaenisch, an author of the paper, said in a press release from the Whitehead Institute in Cambridge, Massachusetts, where he is a founding member. “We can now make a mouse with five mutations in just 3 to 4 weeks, whereas the conventional way would take 3 to 4 years.”

Jaenisch and colleagues’ method takes advantage of a set of proteins and RNAs that bacteria use to degrade DNA from viruses and foreign plasmids. Called the CRISPR/Cas system, it works by recognizing foreign DNA and causing double-strand breaks....

Jaenisch and colleagues used the CRISPR/Cas systems to make targeted double-strand breaks in regions of mouse DNA they wanted to alter. They showed that they could coopt the system to simultaneously make multiple desired mutations in mouse stem cells or in very young embryos, yielding mouse pups with multiple heritable homozygous mutations.

The researchers say that, while they have only tested their method in mice, it could potentially work in other species as well. Traditionally, genetic engineering methods in mammals have required stem cells, and so model organisms have generally been mice and rats, whose stem cells scientists are able to grow. But since the CRISPR/Cas system can be used for genetic engineering in very young embryos as well as stem cells, it could potentially be useful in a wider range of animals.

“This breaks down the definition of model organism,” Haoyi Wang, a postdoctoral scholar at the Whitehead Institute who was also an author of the study, said in the press release.
The paper does note that so far the researchers have only been able to target some regions of the mouse genome, but they suspect that other CRISPR/Cas systems will be able to fill in gaps in coverage.