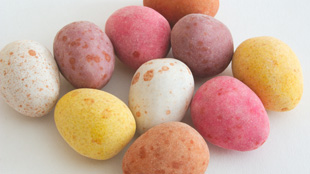 A 70-million-year-old egg dug up from sandstone deposits in the Catalonian Pyrenees in Spain bears an uncanny resemblance to a large, modern-day chicken egg. Although virtually nothing is known of the creature that laid the egg, paleontologists believe it was a small, meat-eating theropod with bird-like features and have named the species Sankofa pyrenaica.

A comprehensive analysis of bird and dinosaur eggs revealed that the Sankofa egg is of an intermediate shape between those of dinosaurs, which tend to be oblong and symmetrical, and modern bird eggs, which are asymmetrical at the poles. A closer look at the structure of the shell, however, revealed it differed from modern birds by having only two hard shell layers, like other dinosaur eggs, as opposed to three.

“Their analysis, which hasn’t been attempted before, makes these new fossil eggs found in northern Spain sort of transitional between modern birds and...