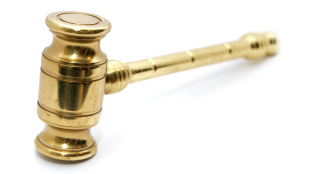 WIKIMEDIA, WALKNBOSTONW. Scott Harkonen, the former CEO of InterMune, is spending his days confined to his home in San Francisco as part of a six-month penalty for exaggerating the benefits of the firm’s interferon gamma drug Actimmune in a press release. As any reporter can attest, press releases often overstate the importance of a molecule or a scientific finding, but to jail the source of a statement is exceptional. “If you applied this rule to scientists, a sizable proportion of them might be in jail today,” Steven Goodman, a pediatrician and biostatistician at Stanford University, told The Washington Post.

The Post this week took a deep dive into Harkonen's actions and their potential implications as his lawyers appeal his case to the Supreme Court. It all began more than a decade ago, when the company was testing its drug for the fatal lung disease, idiopathic pulmonary fibrosis...

The problem, the courts found, is that Harkonen focused on the latter, subgroup result without stating that it came from a post hoc analysis. “What’s unusual is that everything in the press release was correct. What was lacking, the prosecutor, jury, judge and appeals court concluded, was context,” according to The Post.

In a post at his blog, Derek Lowe asked obvious questions prompted by Harkonen's conviction: “What can you say in a press release about a clinical trial?. . . Is there some point where you've clearly crossed the line into fraud, or are all these things just varying interpretations of scientific data?” Time will tell whether the case is taken up by the high court, and whether those questions and others will be answered.