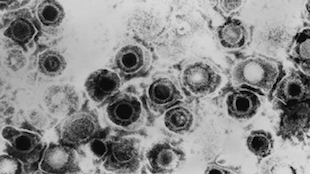 Scientists from the University Medical Center Utrecht in the Netherlands tested the gene-editing technique on three viruses, which not only infect humans, but can remain dormant between bouts of active replication: the herpes simplex virus type 1 (HSV-1), which can cause of cold sores; human cytomegalovirus (HCMV), which can cause birth defects; and Epstein-Barr virus (EBV), which can cause Burkitt’s lymphoma.

Using guide RNAs, the researchers directed CRISPR/Cas9 to cut viral DNA—whether actively replicating or latent in the host genome—at one or more sites. Because DNA repair of the incisions was likely to introduce mutations, the team hypothesized that a virus would be too crippled to replicate, according to Medical News Today.

By targeting two sites in EBV, the researchers...

Using CRISPR, the team was able to abolish active replication of HCMV, but not clear latent virus. Furthermore, when the researchers targeted only single sites in the viral genome, some variants of HCMV were able to escape. In a host, multiple sites would need to be targeted to prevent selection for resistant strains, the authors noted in their paper.

HSV-1 was similarly eliminated when active, but the latent genome persisted in host cells.

Lebbink speculates that the DNA in the dormant virus may be tightly compressed during latency, making it more difficult for CRISPR tools to access and cut DNA while the virus lies dormant, he told New Scientist.

Before the technology can be used for potential treatments, researchers still need to devise how to deliver CRISPR machinery to infected cells.

Although progress is being made, Lebbink told New Scientist, “delivery and safety are key issues that need to be solved.”