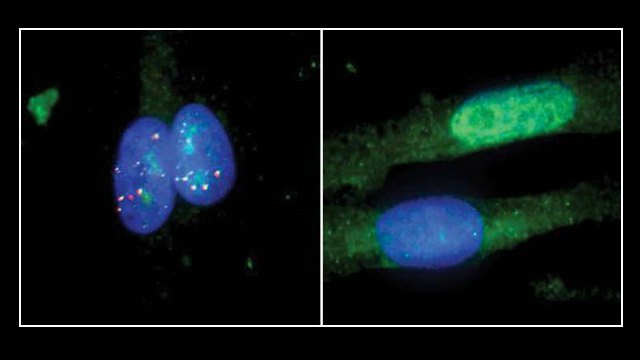 Muscle cells from a patient with myotonic dystrophy type I, untreated (left) and treated with the RNA-targeting Cas9 system (right). The MBNL1 protein is in green, repetitive RNA in red, and the cell's nucleus in blue.UC SAN DIEGO HEALTHArmed with a modified version of CRISPR-Cas9, scientists have removed nucleotide repeats from RNA in vitro that are known to cause diseases, namely, Huntington’s, ALS, and myotonic dystrophy. Cells from patients with myotonic dystrophy were restored to normal function after the CRISPR treatment, Gene Yeo of the University of California, San Diego, and colleagues report today (August 10) in Cell.

“It’s tempting to imagine how this exciting capability might be used to treat genetic diseases one day, although many additional studies are needed to test this possibility,” Harvard University professor David Liu, who was not part of the study, tells KPBS.

The study is an extension of previous work...

Lead author and postdoc Ranjan Batra points out the difference between targeting RNA and targeting DNA. “Any changes we make to DNA are permanent,” he tells KPBS. “Any changes that we make to RNA stay for only a few hours until a new RNA is made.”

Yeo tells the San Diego Union Tribune that a viral vector-administered RNA treatment could last 5-10 years. “The main thing we don’t know yet is whether or not the viral vectors that deliver RCas9 to cells would elicit an immune response,” he says in a statement. “Before this could be tested in humans, we would need to test it in animal models, determine potential toxicities and evaluate long-term exposure.”