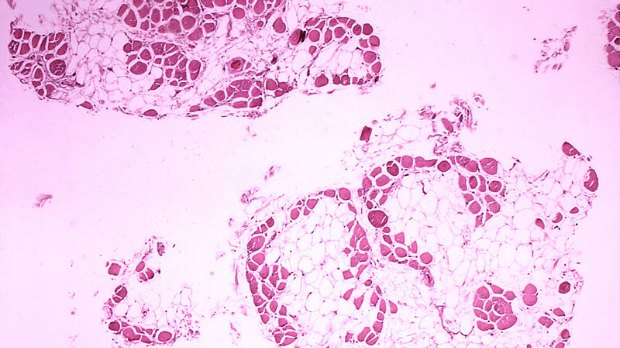 WIKIMEDIA, CENTERS FOR DISEASE CONTROL AND PREVENTION'S PUBLIC HEALTH IMAGE LIBRARYCRISPR has fixed the protein problems in adult mice that lie at the root of Duchenne muscular dystrophy (DMD), a progressive disease that saps kids of muscle strength and ultimately shortens their lives. Scientists had succeeded in using the gene-editing technique to restore protein function in human cells or mouse embryos, but this is the first  time adult animals have been treated.

“The hope for gene editing is that if we do this right, we will only need to do one treatment,” Duke University’s Charlie Gersbach, who led one of three independent research teams that published results in Science last week (December 31), told The New York Times. “This method, if proven safe, could be applied to patients in the foreseeable future.”

The problematic protein is called dystrophin. All three groups took the same approach, first demonstrated in...

The researchers used viral vectors to deliver their genetic payload to tissues. The third team, led by Harvard University’s Amy Wagers, targeted muscle stem cells and heart muscle cells. The other teams injected the CRISPR-loaded vector into leg muscle or the bloodstream. Each approach succeeded to varying degrees, although as Science pointed out, none of the mice were fully cured. “There’s a ton of room for optimization of these approaches,” Gersbach told Science.