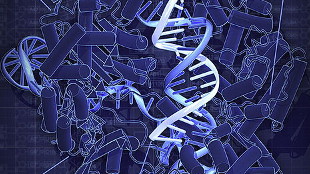 An environmentally dependent method to excise particular genes and eliminate genetically modified organisms (GMOs) if they leave the lab, published this week (May 19) in Nature Communications, uses an inducible CRISPR/Cas9 genome-editing system to snip out vital pieces of the E. coli genome.

The most recent published attempts at creating such a GMO “kill switch” relied on making the survival of genetically-modified bacteria dependent on synthetic amino acids that were only available under laboratory conditions. In the latest study, scientists at MIT created a system that would instead make fatal changes to the bacterial genome when triggered by a change in environmental conditions.

The system, dubbed DNAi, contains two components: CRISPR targeting RNAs, which direct the destruction of a particular gene, are always expressed, and a Cas9 enzyme responsible for excising the targeted gene, which is controlled by a promoter that will only activate the...

For their proof-of-concept study, the scientists used CRISPR to target genes on an extra plasmid. Two hours and fifteen minutes after the team introduced arabinose, the bacteria edited out the plasmid genes. The number of cells containing intact target plasmids decreased by a factor of one million to 100 million within 45 minutes. Targeting the bacterial genome, the number of viable cells similarly decreased. The DNAi system remained viable for more than two months and did not appear to impact the cells’ growth as long as it was not induced, the team reported.

The ability to excise a particular gene without necessarily killing the organism may make the system appealing to commercial GMO manufacturers to protect specific engineered modifications, the authors suggested. “You just plug in all the systems you want erased, and when the system is turned on it will erase that DNA and largely leave the other DNA in place,” study coauthor Christopher Voigt told The Verge. The next hurdle will be to design a more relevant trigger than arabinose to control the kill switch.