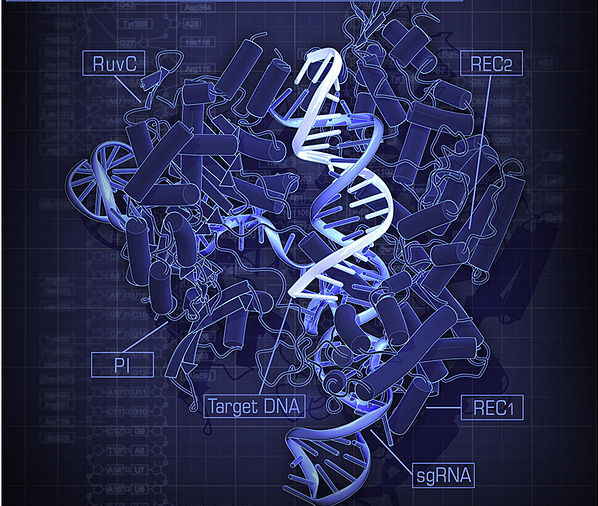 Crystal structure of a Cas9 in complex with an RNA guide and a stretch of target DNAWIKIMEDIA, H. NISHIMASU ET AL.A team of researchers at the Gladstone Institutes in San Francisco, California, has used a version of CRISPR gene editing known as CRISPR interference (CRISPRi) to reversibly and accurately suppress gene expression in induced pluripotent stem cells (iPSCs) and derivative T cells and heart cells, according to a study published in Cell Stem Cell today (March 10).

CRISPRi, first reported in 2013, relies on a deactivated version of the Cas9 protein, which—together with an inhibitor protein called KRAB—sits on a target gene. Instead of cutting the DNA, the proteins simply block the machinery needed to transcribe the gene from gaining access, thereby suppressing its expression. Comparing this approach to the classic CRISPR/Cas9 system designed to cleave the DNA, the Gladstone team found that CRISPRi is actually more effective,...

“We were amazed by the dramatic difference in performance between the two systems,” study coauthor Bruce Conklin said in a press release. “We thought that permanently cutting the genome would be the more effective way to silence a gene, but in fact, CRISPRi is so precise and binds so tightly to the genome that it is actually a better way to silence a gene.”

In addition to its impressive accuracy and efficiency, CRISPRi allows researchers to control by how much they downregulate expression, and to do so temporarily. That these results held up not only in iPSCs, but also in cells derived from the stem cells showed that  “CRISPRi holds a major advantage in making disease-relevant cell types,” coauthor Mohammad Mandegar of Gladstone said in the release. “This development allows us to study genetic diseases more easily and potentially identify new therapeutic targets.”