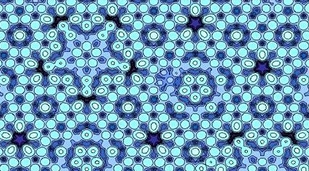 The 2011 Nobel Prize in Chemistry is awarded to Daniel Shechtman of Technion - Israel Institute of Technology in Haifa, Israel, for a discovery made on April 8, 1982: the discovery of quasicrystals, which seem to flout the natural laws of solids.  Most crystals exhibit an ordered, endlessly repeating structure. In contrast, the patterns in quasicrystals never repeat, though they still follow the same mathematical principles.

When Shechtman first identified quasicrystals, the notion was so controversial that his defense of his findings nearly cost him his research position. Quasicrystals forced a redefinition of crystalinity, according to a press conference held by the Nobel Assembly this morning. An ordered pattern is not enough to define a crystal. Instead, anything gives well-defined diffraction pattern is crystal. Over the decades, quasicrystals have been created by other scientists and identified in minerals from a...