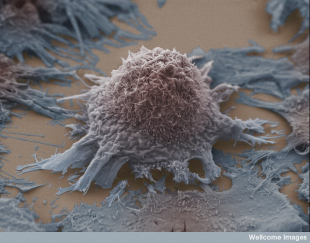 FLICKR, ANNE WESTON, LRI, CROK. WELLCOME IMAGESCancers can become resistant to drugs that once seemed like they could cure a person of the disease. In the unstopping march toward personalized medicine, researchers managed to culture drug-resistant lung tumor cells to screen them for sensitivity to various therapies, finding new and sometimes surprising drug candidates.

“It’s a substantial step,” Jeffrey Engelman of Massachusetts General Hospital Cancer Center told Time. “Because before we just had the genetic information but we wouldn’t have the cells alive so that we could test what types of therapies might work.”

Engelman and his colleagues published their study in Science last week (November 13). They succeeded in growing cells taken from 20 patients’ tumors. Nature News pointed out that, in many cases, the drug screens turned up unexpected candidates. In half of the tumors, for example, a drug that inhibits a protein called SRC managed...

Engelman’s method has yet to face a clinical challenge; patients’ therapies were not altered based on the screen. “This is really setting up the criteria for what we have to look at next,” Richard Schlegel, director of the Center for Cell Reprogramming at Georgetown University School of Medicine, told the Boston Globe. “Someone has to figure out if we grow up these cells, how many times is this going to be an adequate predictor of patient response?”