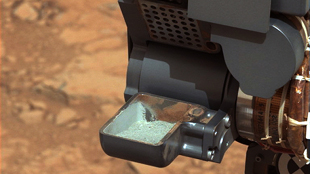 Curiosity has met one of its major goals: sampling Martian clay. The rover drilled into the dirt in the Gale Crater, NASA said in a press conference yesterday (March 12), and extracted a clay sample that, according to analysis by the rover’s instruments, would have been formed in a wet, neutral, and slightly salty environment favorable to life.

“We have found a habitable environment that is so benign and supportive of life that probably if this water was around and you had been on the planet, you would have been able to drink it,” John Grotzinger, head scientist for the mission and a California Institute of Technology geologist, said during the press conference.

NASA scientists chose to land the rover in Gale Crater because satellite observations had established that a peak there called Mt. Sharp had clay on it. But the scientists had to choose a flatter place to...

“We had no idea we were going to go into the aqueous environment that we were predicting to exist here and also find sulfates and also find clays,” Grotzinger said at the press conference.

Mars rovers Spirit and Opportunity had previously found clay minerals on Mars, but they were of a type that would have formed in highly acidic or salty water, less likely to support life. The clays Curiosity found would have formed billions of years ago in the presence of fresh water, before Mars lost its atmosphere, got colder, and dried up.

Curiosity has the capability to identify organic compounds, but the scientists said it could not tell at this point whether this particular sample contained any. For the past few weeks, the rover has had some computer problems that are being repaired, and during April the sun will block communication with Curiosity, so the scientists said they would not drill into Mars again until May.