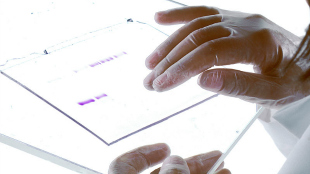 WIKIMEDIA, NATIONAL CANCER INSTITUTECambrian Genomics prints custom DNA sequences, but the company’s founder, Austen Heinz, sees that as just the beginning of what his firm’s technology can achieve. He recently told news outlets that he’d like to see customers be able to create their own creatures.

“Everything that’s alive we want to rewrite,” Heinz told TechRepublic in November. “Everything that’s alive can be made better and more useful to humankind, including human cells. Plants can be made to take out much more carbon out of the atmosphere. We can make humans that are born without disease that can live much longer. We can make humans that can interface directly with computers by growing interfaces into the brain.”

In a report published in the San Francisco Chronicle last week (January 3), Heinz said there would need to be some ethical checks to make sure nothing “bad” is created, but that...

Marcy Darnovsky, executive director of the Center for Genetics and Society, told the Chronicle that Heinz’s goals of modifying humans should be taken seriously. “I think that technical project is far more complicated than they acknowledge. Nonetheless, their story about what we should be striving for as human beings, as a society, I think is very troubling.”