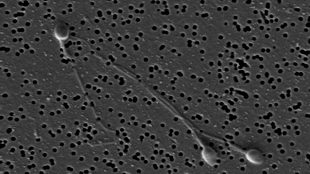 Human spermatozoaWIKIMEDIA, FORSKERUNVWhile most people are familiar with the complications that can occur in children of older mothers, evidence is increasing for the impact of the father’s age on the health of the child. A team of researchers from Indiana University and the Karolinska Institute in Sweden has shown that children of older fathers may have increased risk of some psychiatric disorders. Their work was published in JAMA Psychiatry this week (February 26).

“Paternal age may have a stronger effect than we previously realized,” coauthor Brian D’Onofrio of Indiana University told NPR.

The investigators used data available for more than 2.5 million individuals born between 1973 and 2001 in Sweden from more than 1.4 million distinct fathers. They found that, compared to fathers from 20 to 24 years old, children born to fathers 45 and older had a higher risk of autism spectrum disorders, attention-deficit/hyperactivity disorder, bipolar...

“The older age of dads is associated with not just one disorder or another, but with a large number of adverse developmental outcomes,” Avraham Reichenberg of Mount Sinai Hospital in New York City, who did not participate in the research, told NPR. But he pointed out that the authors have identified a correlation, not a cause and effect relationship. “The most important thing is [that] future mothers and fathers should still go ahead and have children, even if the father is older than 45 or 50,” Reichenberg said. “Most of these children will be absolutely fine.”