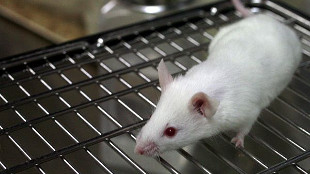 WIKIMEDIA, RAMAWhen fed during the day, mice, typically nocturnal animals, are less likely to explore novel objects and remember fearful places, according to research presented this week (November 17) at the ongoing Society for Neuroscience (SfN) conference in Washington, DC.

Researchers from the University of California, Los Angeles, gave mice access to food for six hours either during the day, when they are normally sleeping, or at night. The result of such a feeding schedule is that “it misaligns the clocks in the body,” group member Dawn Loh told The Scientist. The body’s master clock, the suprachiasmatic nucleus (SCN) of the hypothalamus, entrains to light and is largely unaffected, as are other bodily clocks that take their cues from the sun or from the SCN. But other endogenously rhythmic tissues, such as the liver, are affected, and become out of phase with the SCN and other, unaffected clocks....

One of the affected clocks resides in the hippocampus, an important brain region for learning and memory. To test the impacts of this misalignment between the hippocampus and the body's other clocks, Loh and her colleagues tested the mice for their interest in exploring novel objects and their ability to remember a fearful enclosure. In contrast to the mice that had been fed at night, day-fed mice did not show heightened exploration of novel objects, and they were less likely to recall the scary experience of being shocked in a new enclosure. The results suggest that “hippocampal function is somehow affected by this misaligned feeding,” Loh said.

Additional tests of hippocampal tissue in vitro further supported this idea, with brain slices taken from day-fed mice showing reduced long term potentiation, suggesting that “the ability of the hippocampus to [respond] to a new stimulus is lowered,” said Loh, who added that the team is now exploring which biochemical pathways are behind this change.

These results in mice should give people pause when thinking about their own schedules, said Loh. “I think that’s what we’re doing to ourselves, our children, our students.”

(For more on how mistimed eating can affect health, see “Out of Sync,” The Scientist, September 2013.)